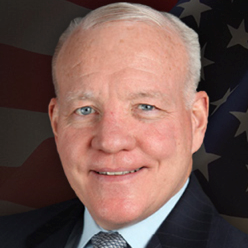 Full Name
Major General (Ret.) Vincent Boles
Title
Major General (Retired)
Organization
United States Army
Speaker Bio
Gen. Vincent Boles is a career Army officer with over 35 years of experience. Highlights include managing the nation's $27 billion ammunition account, assuming command of the Army's War Reserve equipment six weeks before the attacks of 9-11, and flexing into operations in Afghanistan, Iraq and other locations, as well as deployment to Kuwait in preparation for the invasion of Iraq with 142 personnel, growing to a force of 8,000 soldiers, civilians and contractors in 90 days. From Kuwait, the General was forward deployed into Iraq where he assumed command of the 16,000 personnel responsible for providing all logistical support and services to the 150,000 members of the coalition. Following redeployment from combat operations, Gen. Boles led the training of 120,000 soldiers before his final Army assignment, serving as the Army's Chief Operating Officer for Logistics Operations, overseeing the logistics strategy for the 1.1 million soldier Army. Today, Gen. Boles is president of Vincent E. Boles Inc., a leadership and logistics consulting service.